The Power of Shifting Our Beliefs 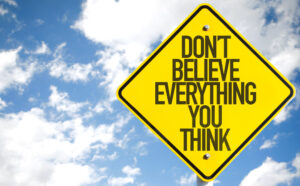 “Don’t believe everything you think” – bumper sticker
This is one of my favorite bumper stickers. It jolts me out of my own, sometimes stuck brain and reminds me to look at the world through a different lens. And when I do amazing things often happen.

For example, I was working with a client recently and I thought – no, I BELIEVED that their cause was far too narrow to attract any kind of meaningful giving. I thought that their mission was interesting and was making an important contribution (I really can’t say yes to a project unless I believe that!). But I was also stuck in my own view, which led me to believe that they were not well positioned to raise the kind of money they were contemplating.

And even though I have been doing this long enough to know that my job is to try to stay as neutral as possible, sometimes I do get stuck in my own view. My ego yells out, “Of course you know best!”
As I was driving away from one of our initial planning meetings a car drove by with that bumper sticker on it. “Don’t believe everything you think.” Which to me also means, “Don’t judge hastily.” “Don’t assume your view is the only right view.”

So, I quietly but firmly pushed my assumptions aside. I did the work – I listened to their donors, I guided their board and staff, I helped create fundraising plans – all the usual stuff. And magically, slowly but surely, we found the right donors who cared so much that gifts even BIGGER than they had originally hoped for materialized, and faster than any of us had thought possible!
So, “Don’t believe everything you think.” And you open space for amazing things to happen.